It was the first talking film. The main character sang about his “mammy.” He sings about her and is wearing blackface. Isn’t that proof Jolson’s character had melanin envy? Why does a Jewish man need to wear Blackface as a Jazz singer? It just doesn’t compute. 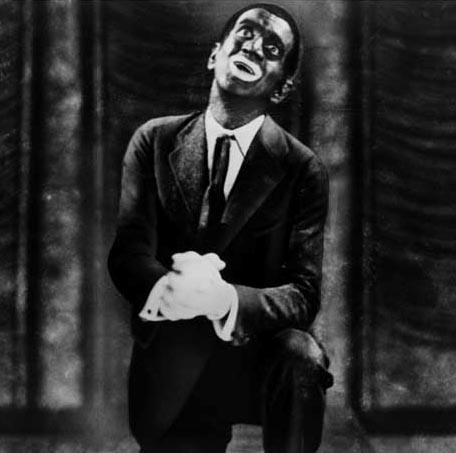 The “Jazz Singer” was inspired by a play named Robinson Crusoe, Jr. In that play, Jolson stars as the chauffeur of a millionaire. Jolson’s character is also in Blackface in that play. Jolson played numerous characters in blackface during his career. But why?

George C. Wolfe makes it clear, the blacking up behavior is motivated by envy. It is the expression of a person perceiving their opponent or adversary being in possession of undue advantage or privilege. Unlike malicious envy, those impaired by benign envy desire to possess the advantage for themselves. In walks blackface. Painting one’s face black provides the melanin challenged with the illusion they have acquired the perceived advantage. The appeal for the audience is they, if only for a brief moment, can live vicariously through the life of an actor who has the courage to play the role of a melanin challenged person who has achieved the miracle of becoming melanin rich.

What else could motivate the person conditioned to believe they are superior to descend to the position of a supposed inferior? When has such a role reversal taken place in nature or in history? Mimics such as mockingbirds do occur in nature, however. The mimic perceives an advantage to its behavior. What is the advantage for the melanin challenged who change their face to something totally different from their physical self?

292. THAT IS TWO HUNDRED AND NINETY TWO titles are listed on IMDB under the keyword “Blackface.” Serious melanin envy is at work in Tinsel town.

Of course among those are Tropic Thunder with Robert Downey, Jr. Did it really seem a story that had such an obvious effort to include melanin envy was necessary? The well-known The Birth of a Nation as well. No, not that Birth of a Nation…the original BOAN directed by none other than D.W. Griffith.

But it really makes you wonder, what else could be behind an Italian American like Tess Gardella wearing Blackface in “Stand Up and Cheer?” It makes you want to stand up and shout “MELANIN ENVY” as she sings “I’m Laughing.”  There seems to be a deep rooted need to express an alter ego who is a person of melanin.

Then there’s Boston Blackie’s Rendezvous. Two melanin challenged males find a reason to dress as women of melanin to fool no one. Watching it the only question that comes to mind is WHY? The obvious answer…melanin envy.

The list goes on and on. David Niven in Old Dracula (aka Vampira), little Shirley Temple in The Littlest Rebel (1935) and Keenan Wynn in Finian’s Rainbow. The list of people who have performed in Blackface shows further analysis beyond the melanin challenged paradigm is needed on this subject.

This whole thing of Melanin Mimicry or blackface is really fascinating when it is looked t through the lens of the Ubuntu Paradigm. This is especially true in the case of “The Jazz Singer.”

In 1936 Warner Brothers released a cartoon entitled “I Love to Singa.” It was basically a revisioning of “The Jazz Singer” featuring a family of owls. One of the owlets, named Owl Jolson was kicked out of his home by his father for wanting to sing jazz instead of the classics like the other owlets.

The little Owl finds himself at radio station GONG auditioning for DJ Jack Bunny. He’s a hit. When he is singing and sees his father, mother and siblings through the window of the studio he stops singing the title song and switches back to singing the dry “Drink To Me Only With Thine Eyes.”

Jack Bunny puts away the trophy he had prepared to award to Owl. Father rushes into the studio and encourages the little owl to finish.

That was essentially the same story beats for “The Jazz Singer” minus the melanin mimicry. Why didn’t the writers of the original Jazz Singer see the real story did not need melanin mimicry? The only answer we can see is melanin envy.

The Mhotep Corporation uses its Keyamsha The Awakening brand to heighten perceptions and expand awareness. By producing content that engages, entertains and educates we create value for value relationships with our audience for mutual benefit. Mhotep is derived from the name of the architect and builder of the first pyramid in Kemet, so-called ancient Egypt. I formed the Mhotep Corporation in 2003 to produce and distribute 3D animation videos based on traditional African stories. Since then it has evolved to being a media production company including books. In a previous life I worked as a systems analyst developing solutions for government and multinational organizations. Born and educated in Washington, D.C. I have traveled to several places including Haiti, the Bahamas, Mexico, Canada, Nigeria (several times), Ethiopia (several times), Benin, Togo, and South Africa. I am married with three children.

View all of Nnamdi Azikiwe's posts.