When the mind is strong enough, the fly will swat itself. — RBGMan

The Melanin Challenged Inferiority Complex is  a belief that race is the primary determinant of human traits and capacities and that racial differences produce an inherent superiority of a particular race. It has three attributes or traits: Melanin Envy, Melanin Denial and the delusional belief in white people.

On Wikipedia can be found an article entitled “Melanin Theory.” In our opinion, the article represents fear. It is part of a culture of fear rooted in the idea a conspiracy exists among Black people to use melanin as evidence to support claims of Black supremacy. Frederick Douglass laid out the impossibility of Black supremacy in his speech “The Negro Problem.”

The Electric Fly Trap patented by E.R. Greene. Inventing a device to draw flies to a place where they eliminate themselves indicates the power of the mind to solve problems with effortless ease.

The wikipedia article is largely the result of references to scholarly articles by one man: Bernard Ortiz De Montellano of Wayne State University. He identified “melanists” as people making what he calls “pseudo scientific” claims about melanin.

This post addresses some of the issues relevant to Wikipedia’s “Melanin Theory” article. Hopefully, it will expand awareness of the issues at work and allow for an increased knowledge of the power available to those whose mind is strong enough to access it.

The earliest usage of the phrase “melanin theory” we were able to find is in the Washington Post. An October 1942 article by Logan Clendening, M.D. reports on gray hair and an alleged discovery of a vitamin to prevent it. Clendening claimed the body reaches a point where it no longer needed to “excrete” melanin into the hair. Then it stops manufacturing melanin and that makes hair white.

The next reference to “melanin theory” appears in regard to the Master’s Thesis film by Robert (Bob) Carl Cohen. Bob Cohen’s 10 minute film entitled “The Color of Man” was referred to in the Saturday Review by Cecile Starr as an extremely interesting visualization of the melanin theory of skin color differences in human beings—blending animation and live photography, music, narration, and color into a distinctly original cinematic style.

The 10 minute “graduate student production” prompted the use of the phrase again in June 1958. Then in a listing of 16mm films, once more by Cecile Starr in the Saturday Review, the film is cited as “illustrating the Melanin theory of skin differences.” 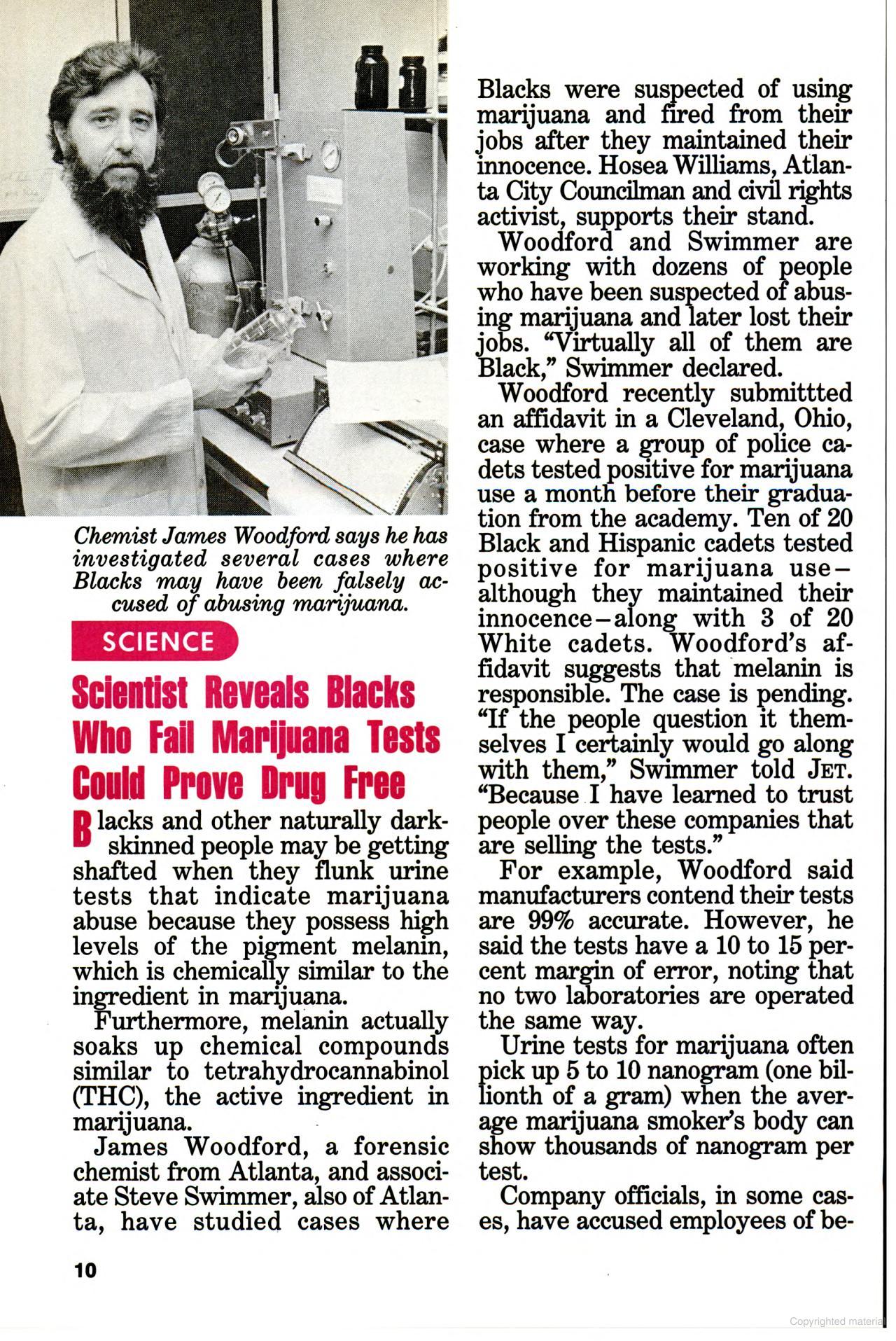 There is a nearly thirty years gap between the references to Bob Cohen’s film and when the phrase “melanin theory” appears in the historical record again. Then a chemist, consultant, toxicologist and expert witness from Atlanta, Dr. James Woodford, expressed concern fragments of melanin broke down into similar components to tetrahydrocannabinol or THC marijuana’s active ingredient. This became the basis for connecting Woodford’s contention to “melanin theory” in a 1986 Associated Press story.

Woodford submitted a ten-page affidavit in support of a lawsuit by the Shield Club against the City of Cleveland. Dr. Woodford’s argument was referred to by Senior District Judge William K. Thomas as “a melanin theory.” The affidavit came to be part of a court case when the Shield Club sued Cleveland after a number of police cadets failed urine tests for marijuana from specimens submitted on October 21, 1985. The EMIT (Enzyme Multiplied Immunoassay Technique) test showed a positive result on 13 out of 43 cadets. Later radioimmunoassay (RIA) confirmed those results. Further confirmation came after gas chromatography/mass spectrometry analysis (GC/MS) tests were conducted on 12 of the 13 samples.

Despite the fact all the foregoing history of the phrase “melanin theory” was easily accessible, curiously, none of it appears in the wikipedia article of that name.

We have mentioned in other posts the origins of the words “wh**e supremacy” and “black supremacy.” One fact revealed itself in the history of the phrase “black supremacy.” Use of the phrase reached epidemic proportions during the late 1950s and late 1960s. Its use dramatically dropped off in the early 1970s, just as suddenly as it increased, without any apparent explanation. That whole time period seems bookended by two articles appearing in Time Magazine.

In 1959, an article appeared in Time Magazine entitled “The Black Supremacists” (view part 1 of the article here and part two here.) In the article a profile is made of The Honorable Elijah Muhammad and the organization he headed. Referred to by Time as “the Moslems,” the organization is described as “a stern, demanding, disciplined black-supremacist religious sect.” Time claimed “the Moslems” outrage “the U.S.’s 100,000 true Moslems.”

When Muhammad last closed his eyes in 1975, Time identified him as “the nation’s most potent preacher of black separatism.” What happened between 1959 and 1975 to change the assessment of Elijah Muhammad and the Nation of Islam? Why were they no longer referred to as “Black Supremacists?” Is there a clue where we can finally begin to cure the USA of what Condoleezza Rice referred to as America’s “birth defect?”

Through the last three years of studying melanin we have gained fresh insight to the world around us. It is now clear to us, there is not now, nor has there ever been, a single, quantifiable, empirical, phenomenon upon which to base the idea or concept of people being white. Furthermore, there is no material substance from which to derive so-called white people. White has no molecular structure. It has no chemical formula and it can not be located anywhere in the known universe using the cartesian coordinate system.

It is our conclusion the concept of white people only persists to keep the lower classes at odds with each other through fear. The culture of fear is a mechanism of political control.

Since “white” as a scientifically verifiable attribute has been falsified, why do we continue to give energy to that nonexistent thing? Could we not, simply by using a different frame of reference, render the effects of so-called “white” supremacy invalid by using different nomenclature? This need for new terminology has given rise to a few insights.

For instance, why not refer to “melanin challenged inferiority complex” instead of so-called “white” supremacy or racism? We know that melanin exists and is verifiable, scientifically. By changing the language we use it informs those we interact with that we have grown and are in possession of the power that Dr. Huey P. Newton still tells us is ours by defining phenomena to make that phenomena produce some result. Changing the language, or “getting the language right” indicates our thinking has changed. By changing the way we speak we have changed our behavior. When we change the way we behave, we change the world.

Replacing “white” supremacy with “melanin challenged inferiority complex” not only demonstrates growth, knowledge wise. It represents the ability to implement solutions making use of the power of our subconscious mind. This manifests as a new paradigm for human relations. Simply by thinking thoughts outside the limited boundaries of the current thinking we expand the realm of the possible.

Exposing the melanin harvesting hoax was a challenge we accepted reluctantly. Being thrust in the midst of a scene devoid of facts has little appeal to us. Nevertheless, we recognize destiny chooses us, we do not choose our destiny.

As such we rose to the occasion and researched the melanin thieves hoax. Doing so allowed us to see the hoaxters are actually what we now know as “melanin deniers.” For whatever reason, they seem to have a need to “obfuscate, deceive and inveigle” good people regarding the truth about melanin. The simple fact melanin is worth over $350 a gram more than gold is, from our perspective God, the universe, nature or whatever higher power you acknowledge telling us she/he/it loves us, values us and wants us to be happy. Apparently, melanin deniers have a problem with that.

Just as holocaust denial attempts to negate and distort the facts about genocide in Nazi Germany, melanin deniers follow a similar vein. The insidiousness of melanin denial is seen through the fact that western culture has embodied in it the color coding of sin and virtue/good and evil.

By identifying ourselves as “people of melanin” we disconnect ourselves from all the negative connotations in Western European structured thought and behavior. We also reorient ourselves to an identity independent of the Western worldview. The Western view of “people of melanin” suffers from a distorted perception of reality. Since the origination of thoughts of race, people of African ancestry have been identified as “black” or “negro.” Both words are replete with negative inferences in western culture.

Although there are positive associations with the word black, the negative seems to be the default view. The word dark is also used to the same effect. People are spoken of as being “dark” skinned, when in actuality they have high levels of skin melanin.

Ironically, black and dark are associated with death, evil, ignorance and poverty in western culture, even though there is also an association with power and authority.

Can rational beings continue to associate negative ideations with high levels of skin melanin at the same time that the very price of that aromatic biopolymer and organic semiconductor is over $350 a gram more than gold? Does the fact that high levels of skin melanin bestow upon those with fully operational melanocytes what can be called “melanin privilege?” Melanin privilege can be having a lower risk for skin cancer and early death from melanoma.

The Mhotep Corporation uses its Keyamsha The Awakening brand to heighten perceptions and expand awareness. By producing content that engages, entertains and educates we create value for value relationships with our audience for mutual benefit. Mhotep is derived from the name of the architect and builder of the first pyramid in Kemet, so-called ancient Egypt. I formed the Mhotep Corporation in 2003 to produce and distribute 3D animation videos based on traditional African stories. Since then it has evolved to being a media production company including books. In a previous life I worked as a systems analyst developing solutions for government and multinational organizations. Born and educated in Washington, D.C. I have traveled to several places including Haiti, the Bahamas, Mexico, Canada, Nigeria (several times), Ethiopia (several times), Benin, Togo, and South Africa. I am married with three children.

View all of Nnamdi Azikiwe's posts.